Yesterday my husband and I went to Anderson, Indiana for the funeral of my Great Aunt Rosie.  It was a sad occasion, and yet I felt grateful to be able to visit with my far flung extended family that made it back to town for the funeral.  This is me with my Great Aunt Frances, who babysat me when I was a little girl and is the youngest of my paternal grandmother's siblings: 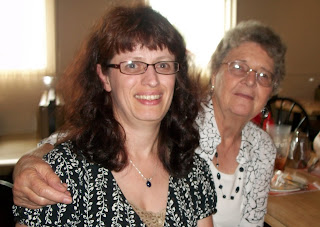 We came to town early so we would have time to visit Maplewood Cemetery where several other family members are buried, including my maternal grandmother, my paternal grandfather, paternal great grandmother and her parents and her sister.   We also knew that one of my husband's great great grandfathers had died in Anderson in 1945.  But we didn't know where he might be buried.  In the 1940's the government used the right of eminent domain to move a whole community of people off their land near Madison, Indiana to form the Jefferson Proving Ground.  My husband's great great grandfather Martin Oshier was among those families to be moved off their farms.  He moved to Anderson and lived with other family members there during the last 2-3 years of his life.  My husband's maternal grandmother is the daughter of one of his sons who had already moved to another part of the state.  By now, what became of Martin was forgotten.
I called the cemetery office the day before our trip and asked them if they could locate the graves for me.  I wasn't certain that all of them were located there but the nice lady on the phone said she would look them up. When we arrived we were given a list of who was found and a MAP of their locations!  Wow! It couldn't be easier; no walking this huge cemetery and searching for hours--AND Martin was ON the list!
We were able to pay our respects at the grave of my paternal grandfather Wendell Thomas and his mother Blanche McElfresh Thomas, 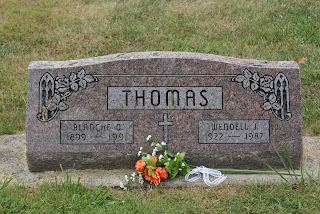 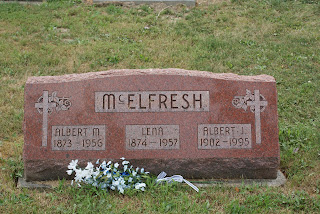 and less than a stone's throw away, there in the Catholic section of the cemetery were my husband's great great grandparents, Martin Osier and Margaret Jordan Oshier.  We didn't know if he would be in that cemetery or what his religious affiliation might be. But it was so easy thanks to the helpful staff in the office. 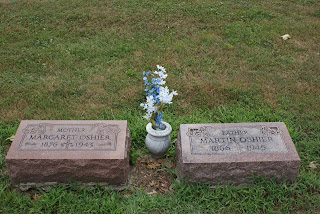 We drove over to the Protestant side of the cemetery to visit the grave of my maternal Grandma, Virginia Goff Blevins.  I felt sad to think of my sweet little grandma who was so kind and was someone I could count on to love me no matter what.  Her gravestone tells of her wedding date to my grandfather and on the back it has the names of her children, including my mother.  Although her oldest child is the son of her first husband; the genealogist in me knows that will confuse someone some day.  It felt odd to see Grandpa's name already there too. 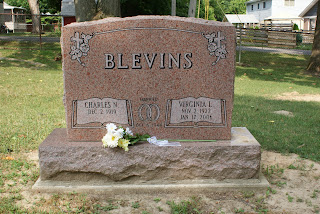 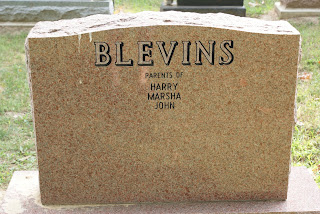 We were delighted with the discovery of Brent's great great grandparents but we wondered if we could learn more.  We had more time and the sun was getting hot.  We escaped downtown to a restaurant that was one of my old stomping grounds when I was in high school, Rax.  Back in the day it had a huge salad bar when those were in vogue.  Now it is a kind of unique franchise that seems to walk to the beat of it's own drummer, and in fact its Facebook page lists it as the last Rax in Indiana.  Well, we did our part to keep it in business.  Especially because it is right across the street from the Anderson Public Library!  We ate fast, wondering if we had enough time to attack the microfilm before heading to a more contemporary funeral.
What we didn't know before entering the Indiana Room of the library, was explained to us by the most methodical gentleman I've ever met in a library.  This tall and lank elder could have been the character in a book which needed an interesting supporting character.  He quietly and (very) slowly showed me the genealogical goldmine of databases accessible through the Indiana Room's website. Most important for our purposes on that trip was the digitized index of all obituaries in the local newspaper.  Be still my soul! It made our task almost laughably easy! Now I had not only the death dates but the date the obituary appeared in the paper.  I didn't have to scroll through pages and pages of microfilm.  The genealogy gods were definitely on my side this time!
But even if I had needed to scan through several days, it wouldn't have been a problem.  The microfilm reader that the librarian called "complicated" was the nicest machine I've had the privilege to use.  First of all, it worked properly in every way.  The film fed automatically, it had electronic controls for focusing, enlarging and scrolling.  It had a computer based interface to send to the printer.  The copies were superbly readable.  I could have stayed there exploring the records on it all day long!  But we only had a short time, so I easily located and copied the records for Martin Oshier for my husband and found the obituary of Albert M. McElfresh, my own great great grandfather.  If only it were always that easy!  I don't think the obituaries themselves revealed any amazing new finds.  But it is wonderful to have them.
The amazing find was the detailed digitized database that I can access from my own home.  I have already found other records for other relatives that I want to explore on our next trip.  There is also a database for graves and naturalization records.  What a discovery!
We went on to say good bye to my Great Aunt Rosie, who I didn't really know that well.  But during her funeral I thought of the Sorg siblings, all of my paternal grandmother's brothers and sisters who numbered 13 in all, born from 1912 to 1935.  There are only three living now from that generation who worked so hard picking cotton, farming, cooking on a wood stove, washing everything with no indoor plumbing.  I am grateful to them and glad that their stories are part of my heritage.
Posted by Elizabeth Thomas Ladd at 6:32 PM 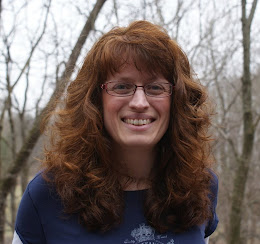